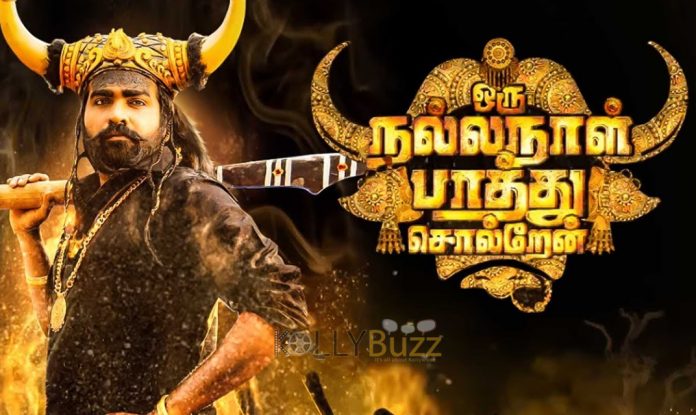 God’s must be crazy and few more illustrative references pondered among the inquisitive investigators to relatively compare Oru Nalla Naal Paathu Solren. But as you watch the film for its running span of 130 plus minutes, it clearly brings you into a strong conclusion that it’s a logic free entertainer that keeps your moments fun-filled in places.

Yaman (Vijay Sethupathi) is a tribal lord with his mother (Viji) as its empress. As ennobled as organic thieves, this group doesn’t injure anyone physically or cause them distress, but steal the wealth. Yaman along with his sidekicks (Ramesh Thilak and Rajkumar) carry out robberies in places and at a point comes across Sowmya (Niharika). Claiming her to be his wife, Yaman along with his aides kidnaps her to his tribal village. Harish (Gautham Karthik) and his friend (Danny), classmates of Sowmya come for her rescue. What’s the real connection between Yaman and Sowmya is revealed with a hilarious flashback in narration.

Gautham Karthik on his part

There are certain appreciable rudiments in the film and first among them is the sense of humour that Arumuga Kumar carries. His penchant taste of witty one liners and his way of utilizing Vijay Sethupathi is considerable. Except that 3 minutes dialogue of Vijay Sethupathi would leave the theatres in complete applause mode, his witty liners in other episodes is enjoyable too. Gautham Karthik on his part has improvised a lot in performance from his erstwhile movies. He resembles his father’s working style too. The other actor who instantly steals the show is Danny. He gets a meaty role after Idharkuthane Aasaipattai Balakumara.

Gayathrie doesn’t get to perform much , but she makes use of the scope that is offered upon her role. It would have been nice if some additional scenes were emphasized upon her affinity for Vijay Sethupathi. But Director tries to imply that by climax scene and he could’ve included few moments of that sort. But being categorised into ‘Humour’, the focus remains constantly into this zone, this seemingly goes missing. While the first half of this film has its series of humour, if the second half was kept intact adding up more plays among characters with humour, then it would’ve been really more engaging.. Niharika looks simple for the role. Although Vijay Sethupathi’s character looks fun-filled, there lies beneath an emotion that is slightly evident, where he says 14 years of love, but director tries to make it humorous with Danny’s statement. Such instances are like City vs Tribal impact.

Technically, cinematography is done with preciseness, where the contrastive tones work in backdrops of city and forest gives good impression. Background score by Justin Prabhakaran, the places where he gives a classical music that suddenly goes out of tune to signify humour is a cherry pick.
Overall, Oru Nalla Naal Paathu Solren is a movie that you should get in with least expectations and logic-free mind, which will keep you engrossed in places. Director Aarumuga Kumar’s concept and Vijay Sethupathi assures upon that alongside supporting star-cast.

Verdict: Mindless Comedy Caper! Don’t worry about logic and you’ll have a toast of it