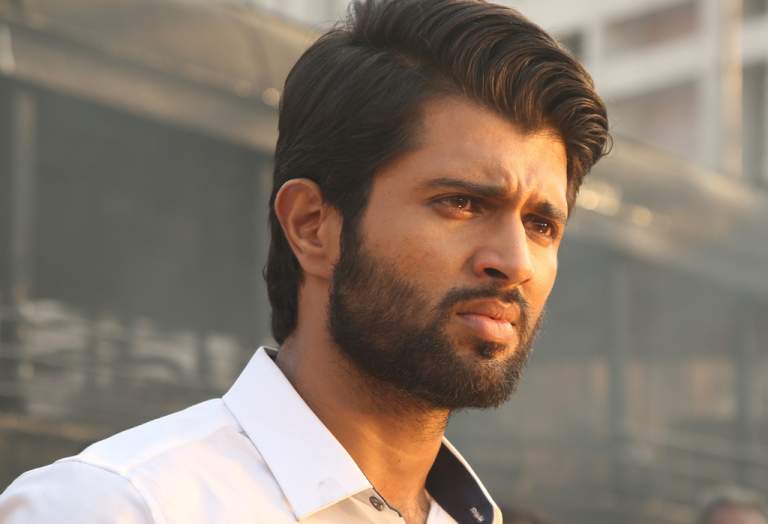 There are certain elements, which came too late in time, yet they managed to offer a fantabulous experience… Inspirations have no time limits, but when you’re recreating the real life incidents, it’s obvious that they have to be done in a short span of time or else, it would turn out to be a threadbare concept. This happens to be the basic problem with Anand Shankar’s NOTA, which is produced by K.E. Gnanavel Raja of Studio Green Films. Featuring Vijay Deverakonda, Nasser, Sathyaraj, Mehreen Pirzada and few more prominent actors, the film has been termed as Political Thriller-Mystery. Let us check out how far it keeps us engrossing throughout its show.

When you’ve ‘Politics’ as a backdrop, it is obvious that things are sure to keep you connected. In this accordance, we find the initial moments of NOTA are really engrossing. Especially, the way Anand Shankar kick-starts the drama with immediate put-in-action and momentum keeps us wondering what’s going to happen next… It even lets us overwhelm with huge anticipations if first hour indeed is so much racy, the second hour will put you more glued to the screens. But in contrast, the second half shifts down the momentum with lots of dramas. Moreover, the Chennai floods and Youth empowerment, MLAs in the resorts and few more elements have already become references in many movies including VIP 2, KO 2 and some even spoofed in Tamizh Padam 2 as well. In a precise way, even the dialogues involving ‘Go viral with Facebook and Twitter’ have become an outdated one. So during this juncture, bringing in such instances in second half completely leaves you bored. Moreover, the transparent shirts with leader’s photo in pockets, bowing to earth for respect doesn’t impress us even on humorous note. Anand Shankar has paid attention to such spoofy things and instead could have landed up with some powerful scenes.

But the performance of every actor is what it saves the film from such drowning moments. Vijay Deverakonda looks promising with what he has done. Nasser is the major showstopper here, where he gets more footage as well. The way he should have strained to dub his voice in few portions of second hour leaves us amazed for his dedication. Sathyaraj to be seen in flashback scene as a teenager might be humorous, but too much overdosed. Yes he looks youthful, but little odd. There is a kind of suspense and mystery built around the characters of Nasser, Sathyaraj, Vijay Deverakonda, which Anand fails to hold it and every kid would make the guess by the time it opens.

Overall, NOTA has a premise that could have actually got its heavy dose of engagement through a powerful writing. But a fallible screenplay and weakened loose ends do put it down a mediocre graph on radar.