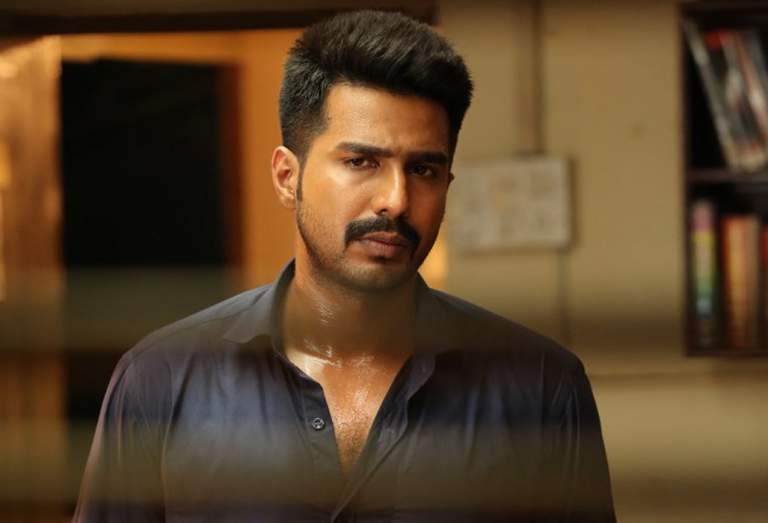 In the art of filmmaking, there happens to be three classifications, where filmmakers are based on. One sticks to own orthodox style and other strives to savour the audiences’ tastes and then comes the third segregation, where the one is stuck amidst. So where does our filmmaker? Naturally, this would never be a topic when it comes to an analysis of a film. But actually what would be a major source of debate is not about the film. Absolutely, the film owns a unique dimension in accordance to the premise. But when it comes to treatment, it’s something we need to step down and dissect. Here’s the Ratsasan Movie Review from Kolly Buzz, which is hitting screens this week.

When the aspiring filmmaker Arun (Vishnu Vishal) is urged by situation to give up his moviemaker dreams and pursue a cop job, he looks disappointed. But with series of mysterious murders happening in the city, sooner his 12 years of research for his ‘Psycho-Thriller’ script helps him unlock some clues.

On the predominant factor, filmmaker Ramkumar deserves special mention for the efforts he has put into his writing. We aren’t bringing up those easily ‘Googled’ list of psycho killers, which has become verily available in Twitter and FB. But then, the emphasis he has stressed upon the placement of scenes, shot divisions and of course, the packaging is good. Absolutely, we can instantly sense and predict how the film’s proceeding is going to be. A psycho-thriller, where the protagonist has done a research of 12 years for a similar script will give a clear impression of how it’s going to be. But then as the story proceeds towards the point of intermission and its aftermath episodes, they are really brainy. But, Ramkumar could have compressed those moments in yet more intact way. Say for instance, the first half has lots of unwanted sequences, which are pretty enjoyable, but not in proper placement. The scene where Amala Paul is being saved from ruffians during late night leaves you clueless and then we realize it was all done for the sake of song. It could have been easily stringed with Supermarket sequence. In fact, this might not be a blatant flaw, but they do contribute to the sluggishness faintly. The school teacher’s role looks purposely. It adds no value to the film and of course, we know the ‘Killer’ would not be trapped so easily, when there are 90 more minutes left for the show to end.

Getting over to the positive aspects, there are few scenes that really knocks us with surprise. The auto-rickshaw connectivity from Amala Paul, The 15-minute episode after interval in school and an unbelievable twist, the way mysteries are unraveled one by one. They are just amazing. But when you pick out those moments, you’ll definitely feel as a crispy version would have put Ratsasan on the top list of mystery thrillers in Indian Cinema.

The entire star-cast has done a remarkable job. Let us forget about the main actors, we know they are capable of delivering best with their dedication. Ramkumar deserves special mention for extracting work from certain actors. Especially, the one playing the role of professor (although his portions are unwanted), his performance is finely done, which creates the effect upon audience. Yes, it’s disgusting too, which might disturb us heavily, but still as an actor, he proves. Vishnu Vishal’s innocuous dimension helps a lot to his character. Amala Paul has done complete justice, but it’s Munishkanth who has delivered a powerful show. Suzanne leaves us irked having no purpose in the film other than yelling.

We tend to notice that Ghibran keeps repeating the same theme score throughout the first half. After certain extent, we are little irked by it, but sooner, he comes up with some laudable music. Cinematography by PV Shankar has contributed its best in shaping the mysterious feel and not to miss the editing by San Lokesh. He actually helps in diminishing the too stretched scenes with his cuts.

On the whole, Ratsasan brings up engaging moments with decent writing of Ramkumar, but he should have strictly said ‘No’ to those unwanted to commercial elements to keep it more engrossing. If he had done so, the film would be an impeccable edge-seated thriller.