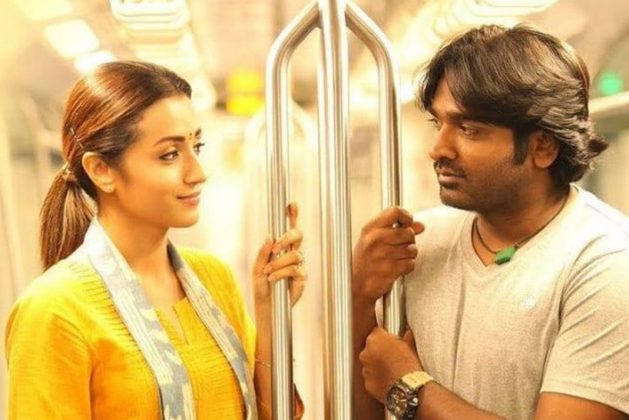 Govind Vasantha who made his musical debut through ‘Asuravadham’ has delivered the album 96. Cinematographer Prem Kumar (Naduvula Konjam Pakkatha Kaanom) maiden directorial features Vijay Sethupathi and Trisha in lead roles, which is bankrolled by Madras Enterprises.

The album opens with a sparkling bright track that travels from slower pace by the prelude and commutes into hard rock-swing mode. It instantly sends an impulsive enthusiastic experience with the rhythmic accompaniment. With the song ‘Kathalae Kathalae’ already capturing our interests through the single track release, it is reused here again with a faster tempo, which turns to be a beautiful attraction. The song’s finishing touch that comes through a poetry rendered by Nassar is colossal one.

A song that comes substantially best with a strong lyrical quotient that reflects among certain cohorts. A song that speaks as a voice of someone from his middle 30s, where the lines like ‘Neraithapin Vaazhkai Puriyudhe’ are some of the reflective ingredients. The musical part with rhythmic touch is worthy of appreciations. Of course, Pradeep Kumar’s vocalism pushes the song to a decorous attractive level.

A soulful pathos of a girl expressed through the slow paced composing. You may not be instantly getting connected to the lyrical verses. But as you keep going for a loop, the song gets intense. Gowri TP pleasingly impresses you with her intonating skills.

It looks like Govind Vasantha has seemingly been inspired with the musical essence of Ilayaraja. Over here, we can such reflective sprinkles here and there. The mildness prevails throughout the track with exquisitely elegance of Chinmayi

There are few traces that faintly reminiscences of ‘Manasula’ from Santhosh Narayanan’s Cuckoo. The song has its own treatment of mild forte pianos, guitars and they are serenely enhancing the song alongside the rendition of Chinmayi and Pradeep Kumar. It’s the interludes that score more of our attention.

The song looks more like a live performance and perhaps, Govind Vasantha carriers the patronage for his ‘Thaikudam Bridge’ reminiscence. It’s so nice and really melodic that it sends a sense of honeyed flow into your senses. Especially, with the renditions juggling between the major and minor scales with the singers, it’s so much imbibing.

The greatest cherry-pick of the album, which had its realms expanded from the time of its single track launch. The sound mixing and the instrumentals that come in hand with the mesmerizing voice by Chinmayi offer an eternal bliss. The other version arrives with Kalyani Menon joining this singer duo is quite commendable. Actually, this version gets more substantiality over the voice than Chinmayi.

As on whole, 96 gives an immense pleasure to the melodious music lovers and Govind Vasantha stands out to be a stealer of the season.