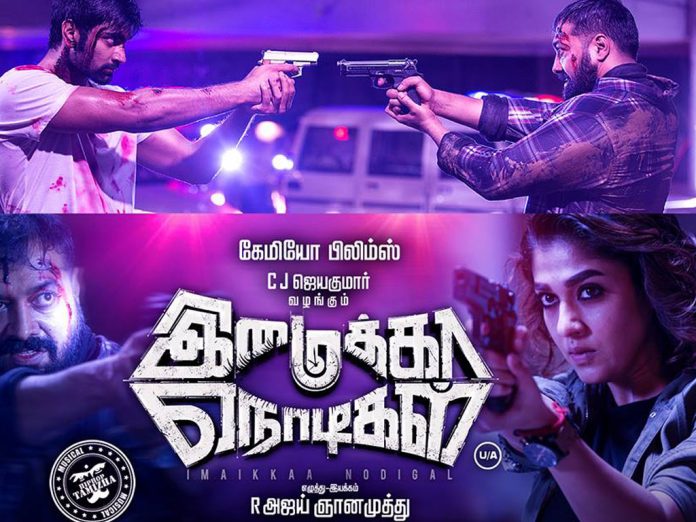 Filmmaker Ajay Gnanamuthu offered a decorous directorial debut with a spine-chilling tale ‘Demonte Colony’. Nearly 3 years after this film, his second outing ‘Imaikkaa Nodigal’ is all set for a major release on this Thursday (August 30). Nayanthara, Atharvaa Murali, Anurag Kashyap and Raashi Khanna are playing the lead roles in this film, which has musical score by Hiphop Aadhi and RD Rajashekhar a the cinematographer. Kolly Buzz brings you 5 distinct reasons why you shouldn’t miss this film.

A RACY THRILLER WITH A COMPRESSED TIME-FRAME

In the recent times, it has become a ritual to see that many audiences have started noting the running length of the films. Of course, they have started judging the film’s outlook through this element. While Imaikkaa Nodigal has a running length of nearly 2hrs 50mins, the team assures that it will offer an experience of just 2hrs version. Such will be the raciness in this edge-seated action thriller.

Actress Nayanthara happens to be the greatest attraction in this film, which is said to be an intriguing element. Initially, the role was meant for a male actor and eventually got passed on to the female one, which the team felt that Nayanthara alone could do justice to the entire film. She’ll be seen playing role of a CBI officer on the hunt of a serial killer.

ANURAG KASHYAP – THE TERRIFIC NEW VILLAIN ON THE BLOCK

This baddie has made everyone go terrified with his phenomenally eccentric performance. ‘Rudra’ would be a major attraction out here in Imaikkaa Nodigal, which is played by Bollywood’s most celebrated filmmaker Anurag Kashyap.

Although, Imaikkaa Nodigal is categorized under ‘Thriller’ genre, there will be a decent ingredient of ‘Romance’ involved. The 15-minute portions involving Vijay Sethupathi and Nayanthara and Atharvaa-Raashi Khanna episodes will be a lively and enjoyable one.

Even before the release, almost all the songs composed by Hiphop Aadhi have turned to be decent hits. Moreover, music director Aadhi assures that more than songs, the re-recording will be much more highlighting. Not to miss the top-notch visuals cranked by the genius cinematographer RD Rajashekhar, whose visuals in the film are already appreciated for a Hollywood feel impact.