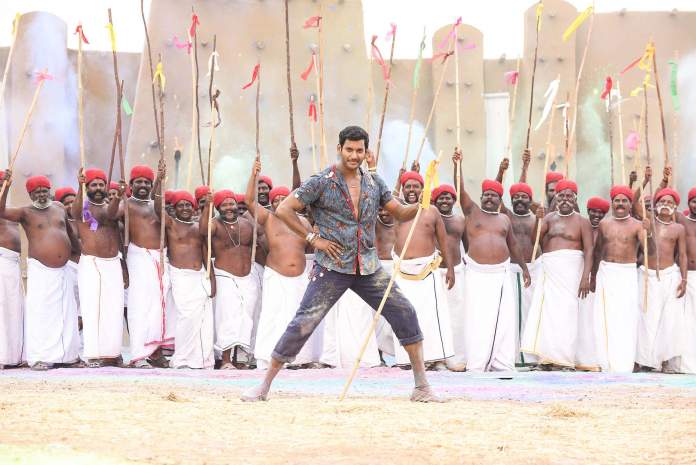 The racy action packed family entertainer is back in show now. After 13 years, we get to see the most fascinating Sandakozhi sequel happening. The same team arrives with few more inclusions and the film is scheduled for release on October 18. We at Kolly Buzz bring you 5 good reasons to watch the film.

Of course, this happens to be the most reveling thing for not just the audience, but the entire team. They have come together nearly after 13 years. Yes, the title ‘Sandakozhi 2’ is a more than enough factor to bring in more crowds. Vishal, Raj Kiran, Yuvan Shankar Raja and almost all the same crewmembers from first part are definitely the sparkling attractions.

The terms of ‘Vishal’ and ‘Action’ are completely inseparable, where we get to see that in every movie. Naturally, how this most celebrated ‘Sandakozhi’ franchise can happen to be. The action sequences choreographed twins Ram-Lakshman and other stunts by Anl Arasu are definitely going to be a sensational highlight in this film.

Apart from Vishal, it’s definitely Keerthy Suresh and Varalaxmi Sarathkumar, who will be the showstoppers in the film. Already, everyone in the crew is consistently offering their praises upon Varalaxmi for her villainous role in the movie. Moreover, actor Raj Kiran has said that by the end of show, everyone will realize and accept that she isn’t a villain, but somewhat equal to the hero. On the par, Keerthy Suresh reprising the role of Meera Jasmine has created generous expectations for the movie too. Though, Meera Jasmine cannot be outperformed, Keerthy Suresh has her own style of appealing to our interests.

Yuvan Shankar Raja’s songs have already become sensational hits, especially the numbers – Kambathu Ponne and Sengarattan Paaraiyila have become massive hits. Precisely, the background score too is definitely going to one of the most highlighting traits in the movie.

The entire movie is set against the backdrops of festival and the set works by Rajeevan is already raved by everyone. In fact, it is going to be such an appealing one, where audience will not be able to differentiate between a set and real festival backdrop.