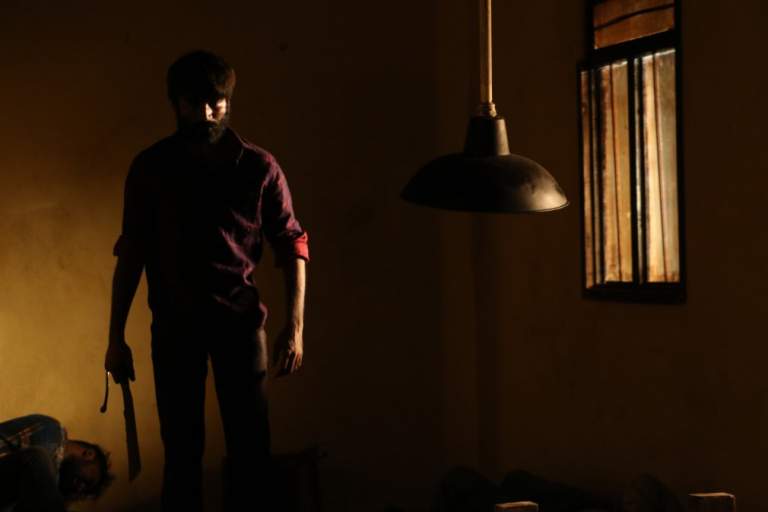 Yes, we are honestly commuted to the 80s, 90s and earlier 20s of Madras then Chennai. Especially, if you’ve been lucky enough to witness some of the shocking incidents like assassination of Rajeev Gandhi and demise of MGR, you could find yourselves related as a Madras guy. But, what becomes a major source of gaining applause from audience is nothing but the profane language, which the makers have already proclaimed it as a ‘Part of Lifestyle’. Yes, but it does look like an excitement for majorscule audience. Of course, there’s a drama in the film, where it opens in a powerful and gripping note in 1987. We see Guna (Samuthirakani), Senthil (Kishore), Velu (Pavan) and Pazhani (Dheena) are bathed in sweat and blood after a cruel massacre and victim remains blurred over the corner of a local restaurant. Senthil and Velu surrender themselves to police while the other two remain outside vowing them to bail them out. It’s been a year and there happens to be a rivalry breaking out between them. Then, its 2000, where Anbu (Dhanush) arrives into the same prison for a petty fight with Guna’s sidekick Siva (Pavel Navageethan)… Here begins a kind of game that binds fate and destiny together with many characters have its play on the roll.

Vetrimaaran has always proved himself to be a strong author than a filmmaker. His scripting always owns a unique style and it is prevalent here too. The strongest highlight of the film, where everyone remain so much substantial throughout the drama… But again, the characters’ journey alone becomes so much prevalent throughout the film. Looking deeply into the film’s run, we can sense a bit of actual intention of Vetrimaaran as a writer, where the first part of Vada Chennai has good moments, but it remains completely dedicated to establishment of characters. It’s only by the penultimate to climax, we are revealed and as the story unfolds to final credits, we are given the title of Vada Chennai 2 as well with the tagline – The Rise of Anbu…

Over the performances, it’s fantabulous with everyone. They have nailed it down with excellence. In particular, it’s Dhanush all the way, who is known for his spontaneous versatility in such roles. Every time, we see him in a Vetrimaaran film, he’s always at his best. Andrea Jeremiah gives an amazing performance, especially by the final moments. Aishwarya Rajesh is perfect. Although, Ameer appears in an extended cameo and he is the absolute showstopper, especially in the final scene. Samuthirakani, Kishore, Pawan and everyone have their roles neatly conveyed. Daniel Balaji owns a special place for his characterization and performance as the one that holds pain, mystery and vengeance within eyes.

Velraj is the man who deserves best appreciations for his extraordinary camera works. On the other hand , it is Jacky, who gives a brilliant impact through his art works. Santhosh Narayanan’s BGM gets more mileage by the final moments.

Overall, Vada Chennai stands out to be a raw and rustic film, which creates it own world setting way for its forthcoming installments in the franchise.