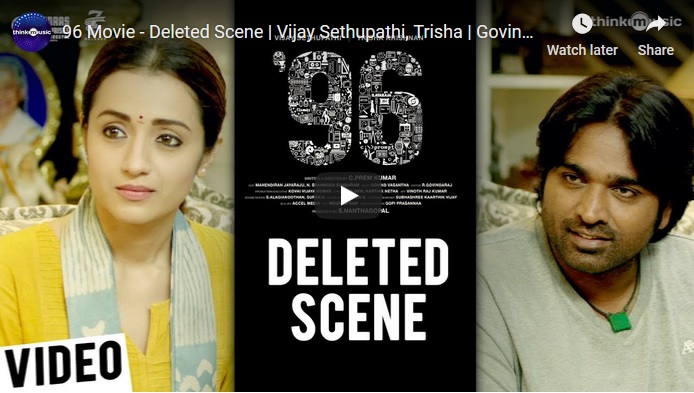 The fever of ‘96’ isn’t fading anywhere sooner. It’s been 50 days of release and shows are still going house packed with decent occupancy. Despites, the satellite Television and Digital streaming premiere, the film has managed to make through an incredible victory in box office. While everyone is raving about the film, here is an interesting fact about the movie, which we weren’t able to see in the theatrical version. Now it has been released on YouTube channel by Think Music.

According to the story, Jaanu (Trisha) happens to be the diehard fan of playback singer S Janaki. In fact, we see the character always crooning the evergreen classic of this legendary singer. During the reunion meet, it happens that Ram (Vijay Sethupathi) and Jaanu spend a night long over the bike ride, car drive and even metro rail journey. At a point, Ram manages to go across the house of playback singer S Janaki and makes Jaanu meet her.

Close sources mention that S Janaki was paid a decent remuneration for playing the small role and allowing the shoot to happen inside her house. Regrettably, the scene had to be deleted on the spur of moment due to some reasons, maybe the makers wanted to keep the duration intact.