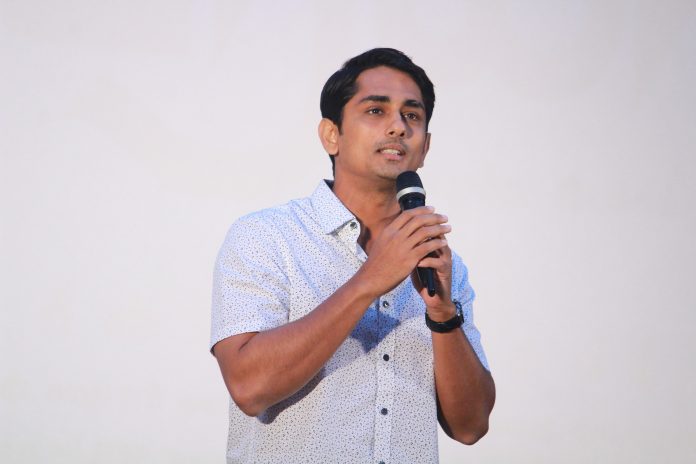 Actor Siddarth is well known for expressing his outspoken thoughts through his words. Significantly, the Peranbu audio and trailer release event wasn’t an exception. The ‘Aval’ actor rendered an impressive speech appreciating everyone. But he had something little disappointed with Yuvan Shankar Raja fans during the film’s event. Well, it wasn’t something really mean, but the way they mark the young maestro’s current status. “I always get angry with the fans, who say its Yuvan Shankar Raja’s comeback. This musical genius never faded to make his comeback. His status in musical word is unshakable and none can replace him,’ said Siddarth.

Consequently, he appreciated director Ram for bringing such intensely beautiful movies. “When an ordinary music director and filmmaker discuss to offer something new in their next outing, it’s quite normal. But from a versatile duo Ram- Yuvan Shankar Rajathat offered movies like Kattradhu Tamizh, Thanga Meengal and Taramani,” added Siddarth.

Actor Siddarth winded up that everyone wonders how Ram possesses such exceptional filmmaking ability. “My dear friends, do you know someone called Balu Mahendra? Ram is his student and there is no wonder about his unparalleled vision.”

Peranbu features Mammootty in lead role and the teaser has garnered incredible response.