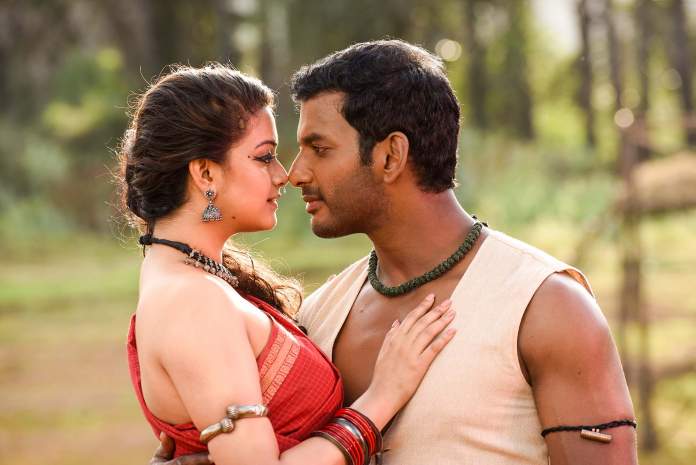 We still remember the season when Sandakozhi was released, where it had the crowds flocking in through word of mouth publicity. It was completely a new face Vishal, where he was just one-film old and rest of the things were magical. Years have passed and the magic still retains. Significantly, the makers have tried banking on this success to come up with a sequel. Having said that the film owns lots of prominence and good dosage of commercial ingredients, let us have a look how far ‘Sandakozhi 2’ works out.

Set against the backdrops of a village festival, a village head (Raj Kiran) and his son (Vishal) have to fight the evil battle of a widow (Varalaxmi Sarathkumar) craving for the last descendant (Madras fame Hari) of a family that was responsible for her husband’s death.

Lingusamy and his team of writers have tried conceptualizing a package of family entertainer that would bring in universal audiences. Yes, there are certain episodes in the film that showcases them decorously. But the basic problem is the characterization of Vishal himself. Of course, his action blocks are mind-boggling and there’s no doubt about it. Throughout the film, we find him walking besides Hari and protecting him. It could have been a best option to just send him away to a distant land to safeguard him. Why wait till the climax and speak out lengthy dialogues to Varalaxmi Sarathkumar by the end? Instead, he could have done by the initial moments itself. There are few best performances too. It’s Raj Kiran who owns the screen completely and Lingusamy has sketched his characterization with so much of elegance and substantiality. Be it the scene, where he shows the love over the son or the intermission fight, they’re outstanding. Keerthy Suresh tries to remain on par with Meera Jasmine, though there is no need. In few places, she’s good though. Varalaxmi Sarathkumar does nothing than asking all men besides her to get the job done. The climax action sequence has imparted her good involvement though.

Yuvan Shankar Raja’s BGM is really appreciable and he has really worked hard in every place. ‘Kambathu Ponne’ and ‘Sengarattan’ songs are pictured and choreographed well.

Lingusamy and his writers’ team have worked decently over crafting some scenes. When you separate them as a scene, they will have a good impact. But the problem is the way, they are connected.