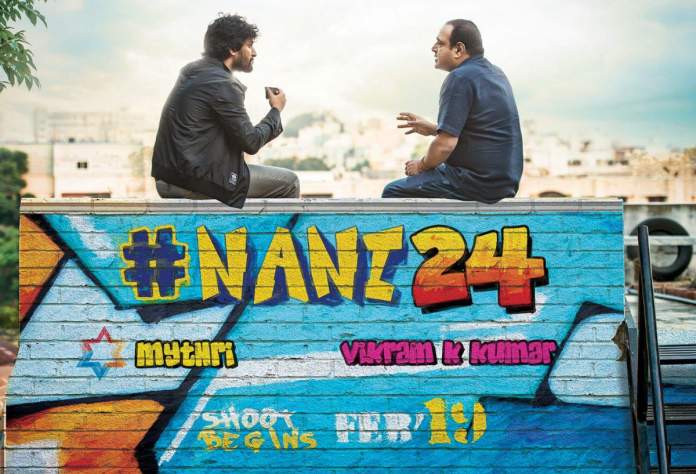 Filmmaker Vikram Kumar, who is far-famed for his mind-boggling supernatural thriller ‘Yaavarum Nalam’ and Sci-Fi thriller ’24’ gears up for his next film. The official announcement regarding his new film has been made. He will be directing a Telugu movie featuring Natural star Nani in lead role. The film is tentatively titled as ‘Nani 24’, which is produced by Mythri Movie Makers. The film’s shooting will go on floors from February 19, 2019 and P.C. Sriram has been signed to handle cinematography. It is not yet known who the others in the cast and crew are. Well, the instantaneous curiosity that arises in everyone’s mind is what could be the genre of this film. Naturally, the filmmaker having delivered films like ‘Yaavarum Nalam’, ‘24’ and ‘Manam’ based on different genres has propelled such inquisitiveness. Moreover, it looks like a comedy caper as it get signified through Vikram Kumar’s tweet. It reads, “Nani and I are coming together to give you guys an outrageous heartwarming caper! Girls – this one is especially for you.” (Sic)

Vikram Kumar made his directorial debut through ‘Alai’ that featured STR and Trisha in lead roles. After a long hiatus, he made Yaavarum Nalam with Madhavan, which turned to be a massive hit. His other movies like Suriya’s 24 and Nagarjuna starrer ‘Manam’ became box office hits.