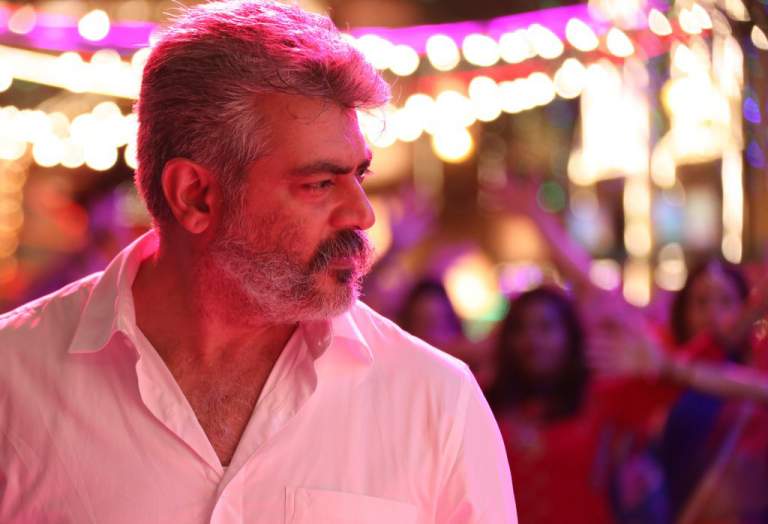 Filmmaker Siva and Ajith Kumar had delivered three films in different genres (Vivegam, Viswasam and Vedalam) that had different receptions and results. Especially to take up their previous outing ‘Vivegam’ for reference, it turned out to be a disappointment due to various reasons. Moreover, the same duo coming together had its own welcomes and resentments. However, while watching Viswasam, certain things literally show up evident that both of them aren’t settling down for a compromising project for commercial purpose. Produced by Sathya Jyothi Films, the film has Nayanthara playing the female lead with Baby Anikha, Jagapati Babu, Vivekh, Robo Shankar and Thambi Ramaiah in important roles.

The story revolves around the life of Thooku Durai (Ajith Kumar), who is honest and innocent, but always indulges in devil-may-care acts. Niranjana (Nayanthara), a doctor by profession falls in love with him for the good-hearted nature and they are blessed with a baby girl Swetha (Baby Anikha). Much disappointed with his ruffian behaviour, Niranjana departs from the village to Mumbai along with her daughter. After few years, Thooku Durai sets out to Mumbai for reuniting, but he has a different conflict to battle now.

As abovementioned, Ajith Kumar deserves a special mention for boldly choosing a film owning such a premise. Although, it has mass moments that his fans expect, he stands out to be a great performer in emotional context. Of course, could anyone imagine an Ajith Kumar film’s climax without a fight? That’s a bigger attempt from Siva-Ajith duo. Moreover, he lets other characters dominate his role and score brownie points. In many places, we find him remaining silent where Nayanthara and Baby Anikha get to offer more. But his spontaneous ability to emote through silence itself gains our attention. The first initial moments, where Ajith Kumar tries to evoke laughter might not appeal easily, but his emotional spell in the latter part is so natural. Nayanthara showcases a matured performance as Niranjana. She has improvised a lot in her acting and obviously, she gets a perfect role after long time in a commercial movie. Baby Anikha is excellent. Her looks without makeup and innocuous characterization are wonderful. We might find the list of actors running into long queue, but they occur like cameos. It’s Vivek who manages to keep us engrossed in second hour whereas Robo Shankar and Thambi Ramaiah accompany him throughout. Jagapati Babu’s character too doesn’t get artificial anywhere as it carries some emotions too.

Although, Siva delivers a beautiful emotional storyline, it might appear as 90s sentimental movies. Maybe, it could be labeled as Vikraman-S.A. Rajkumar-Sarath Kumar trio flick too. Nonetheless, the message that is conveyed here is absolutely perfect and it is something need-of-the-hour factor. It‘s so much appreciable to see Ajith Kumar take up this one and do a complete justice.

When it comes to background score, D Imman utilizes ‘Vaaney Vaaney’ theme for Ajith-Nayan and ‘Kannana Kanney’ extended instrumentals for Baby Anikha… Although, they are good, it would have been little appealing if he had tried some additional tunes.. However, the songs however gain our interest with colourful visuals and choreography.

If you’re looking out for the flip side, there isn’t more than the already mentioned story, which might look time worn and quite predictable, but it’s flawless.